The K-shaped economy will bring K-shaped inflation with it.

I’m not the first to talk about this, but I feel like I need to help broadcast this message. This is US-centric. As always, take with salt. I’ll try to be brief.

In order to help manage the economy, central banks engage in monetary policy. They can help energize or relax markets by managing how much money is in play. "Reducing" the amount of money slows the economy by limiting the funds available for risky investments or those that don’t yield much. In the other direction, they can "add" money to the economy in order to boost innovation, reduce unemployment, and stoke demand for goods and services. The mechanisms by which this happens are complicated and not the subject of this post.

Suffice it to say that reducing money supply keeps inflation under control and ensures the efficient allocation of resources, but can raise unemployment and slows growth. Too much money means more ideas get funding and gets more people jobs, but can overheat the economy if too much money starts chasing too few goods.

That last bit manifests as inflation, meaning that money doesn't go as far as it used to (like when a 20oz cola was only a dollar). We generally measure inflation with the Consumer Price Index (CPI) which measures the cost of a collection of common things like eggs, milk, cereal, gasoline, and other American household goodies. When these get more expensive, CPI goes up. It’s the Dow Jones of inflation.

In order to prevent another 2008, central banks in most countries are adding money to their economies. The US alone has doubled its money supply in the last two years. One of the worst economic things that can happen during a shock like COVID-19 is a vicious cycle where people are worried they’ll lose their jobs, so they stop buying stuff, which causes businesses to slow down, so they do rounds of layoffs, which causes more uncertainty, and the cycle repeats. Right now there’s more liquidity in markets, so most companies can float the difference, jobs are still intact, people keep buying stuff, and the impact is smoothed.

This is why most of the relief packages are set up as “paycheck protection programs” and corporate loans and not money in your pocket, but that’s a can of worms for another time. #UBI #UniversityShouldBeFree

So we’re seeing the famous K-shaped economy, where some parts of the market are still sluggish while others are explosively successful. Industry and service jobs like factory work, waiters, and clerks are in sharp decline and are at long-term risk of being replaced by machines. At the same time, tech jobs and white collar work are at peak- and growing- demand. It’s inappropriate to measure them together so we’re going to see an economy with a yawning divide between these kinds of industries. Between the manual work and the mental work. Between the haves and have nots.

Here’s the gist: The things associated with the upside of the K-shaped economy has experienced inflation masquerading as growth and will continue to do so.

I don’t reckon “inflation” as we usually recognize it will increase much. Bread is not meaningfully/permanently increasing in price. Neither is electricity, gas, or blue jeans. These are things we’re good at producing enormous quantities of, so their price won’t increase if demand goes up with a white-hot economy.

There is too much money chasing too few rare goods and that's where it's happening. In order of their priority, in my mind, prices are growing on:

This has been happening during the last administration, but has accelerated due to the virus. China now controls ~80% of the raw materials for advanced battery creation. The stock market is on an insatiable bull run with no corresponding increase in earnings. See below. 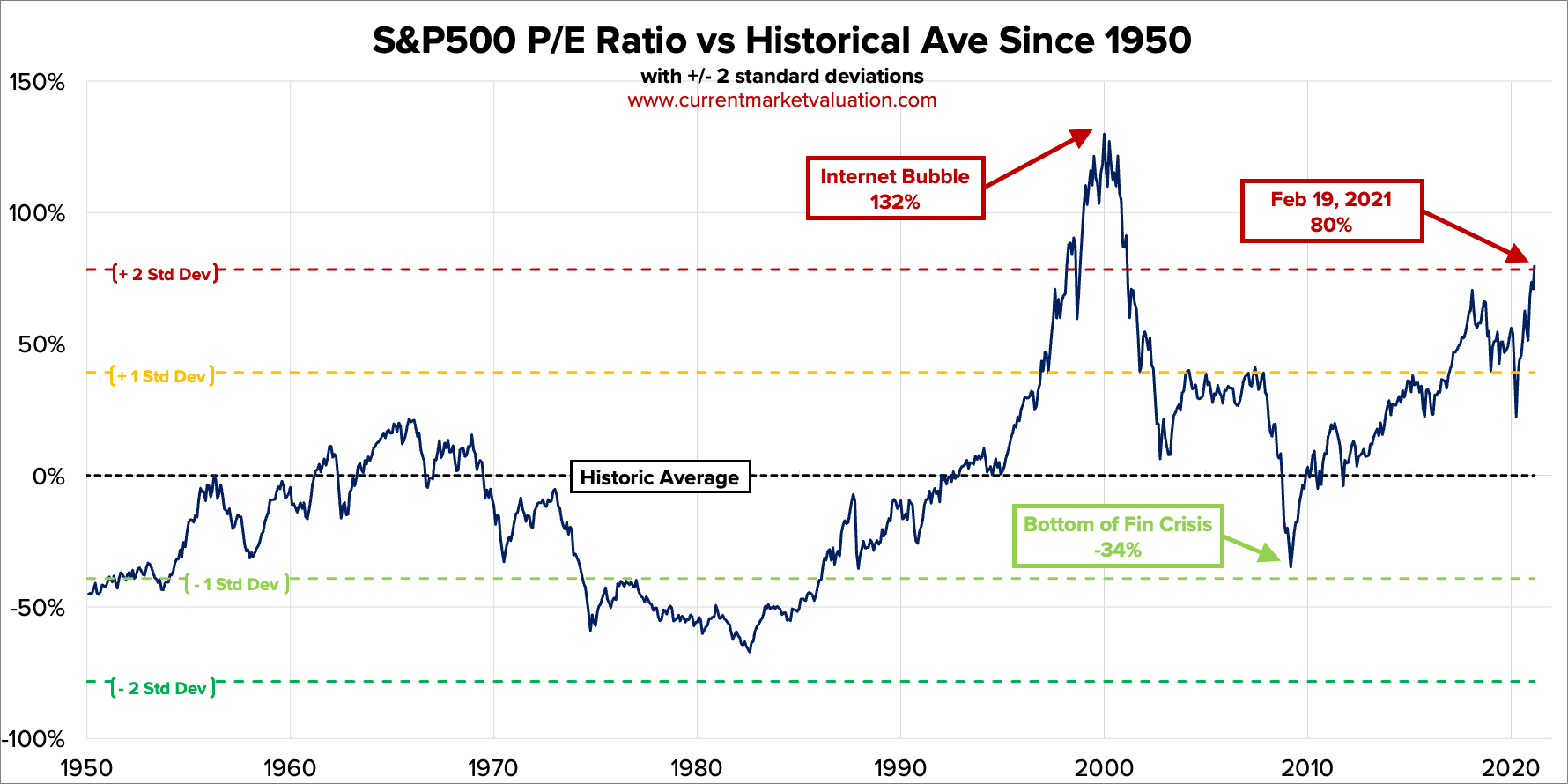 Price to Earnings ratio shows how many years of current profits it takes to recoup an investment in the stock. Higher numbers means it takes longer to pay off, and this chart shows there’s too much money trying to chase too few profit streams. To reconcile this, there either needs to be a market crash (something else is a better investment) or innovation needs to catch up to expectations (debatable) or this is the new normal (inflation).

I can’t tell anyone what to do because it depends on your individual setup, but here’s what I tell myself:

Trying not to be a shill here, but this is one of Bitcoin’s strengths, and I personally look to it as cash storage of last resort. Getting started with Coinbase is remarkably easy and I suggest everyone hold at least some Bitcoin.

Stay safe out there.