A project where I experiment with the maximum possible population within a single city tile in Cities: Skylines.

Join me as I explain my process in trying to reach the maximum possible population in the starting tile of the game.

Cities Skylines is a wonderful extension to the original Sim City game theme and I've been enjoying it a lot lately. One of the self-inflicted challenges I've undertaken is to try to create a city with the highest possible population in a single tile. 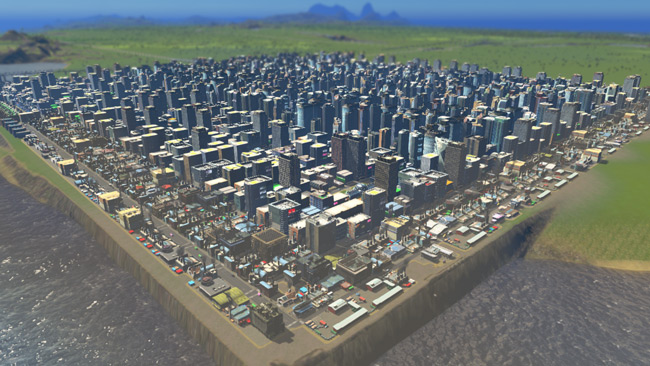 When I set out to do this, I made an effort not to try to reverse-engineer the game. I don't want to learn all the finer points of how C:S works, and I won't relay that here. I'll try to stick to the broad strokes because this game is highly complex so a scientific approach would take a long time. I'm using the "All Easy" template on Steam.

Maximum Buildable Land The starter tile has about 230 x 230 buildable squares when fully flattened and leveled. That means there's a total buildable area of 52,900 squares. 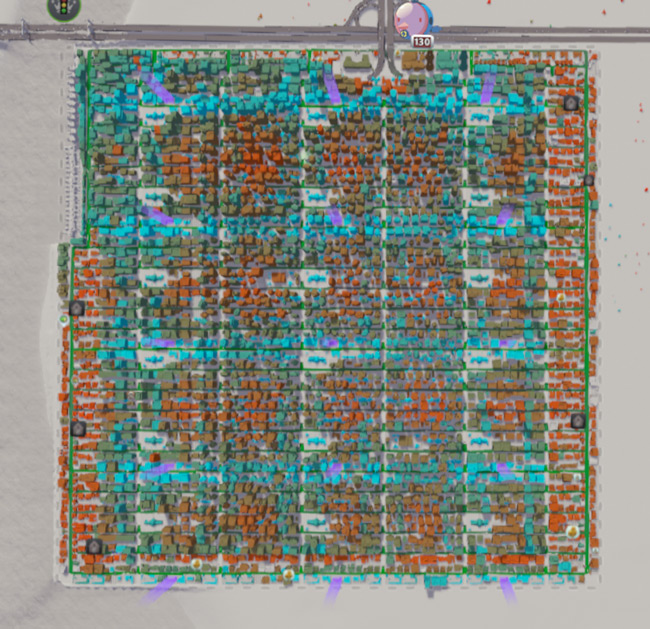 You can see the general layout of the city above. Mostly grid-pattern with the edges having most of the custom stuff. Every purple column (fire departments in this case) are clusters of civic buildings.

Maximum Theoretical Population At high density and full upgrade status, a single square can support two citizens. That's two jobs or two residences. So the maximum theoretical population is around 105,000? That's if every square was zoned for one of those two things. To be honest, I can't explain why I got such a number. Best guess is that city-wide population is calculated differently than what the squares themselves provide. 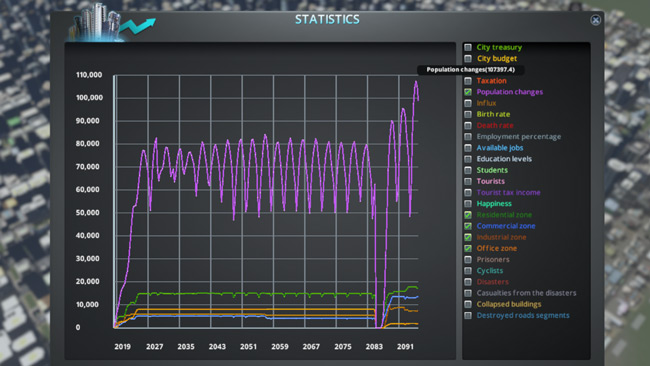 I spent a lot of time building cities for fun and got a feel for which patterns work and which ones don't. The most useful skills were: 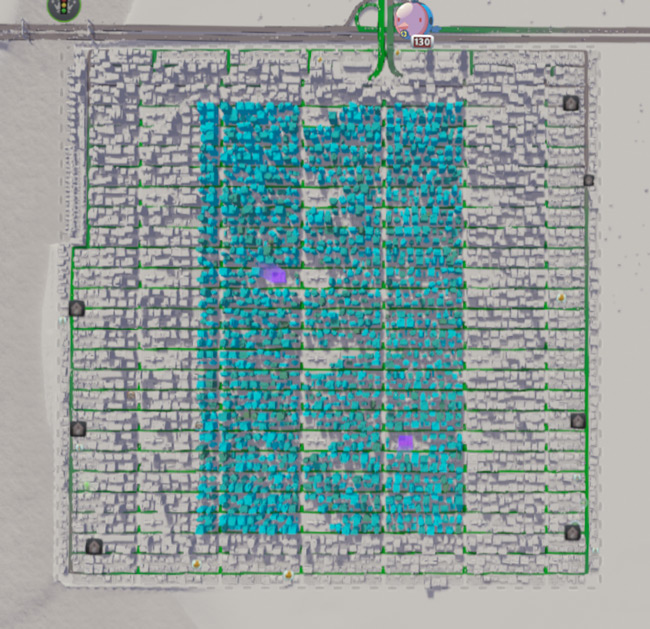 In order to best accomplish what I wanted to do, I thought a repeating pattern would be best. If I could build a pattern that was tileable, traffic-efficient, and (best of all) profitable, then it could be repeated across an entire game once the landscape is flattened.

So I set to work building tileable roads with progressively greater and greater efficiency.

First generation patterns were grids. Squares or rectangles of streets that cross the landscape. These are cheap to build and keep traffic mostly under control. They're not a bad way to go! They're not the most efficient solution because at high loads they clog up easily. 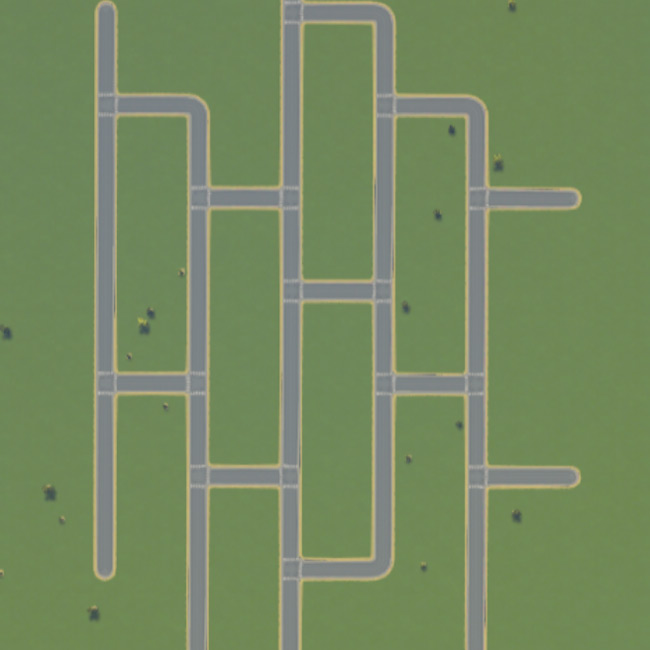 Second generation patterns made use of my discovery that only above-ground things matter. Every square you take up on the surface world with roads is a square that a citizen can't live or work on. The goal in this set was to move as much infrastructure underground as possible, leading to long stretches of parallel roads that don't touch. Citizens have to go underground to go north/south. 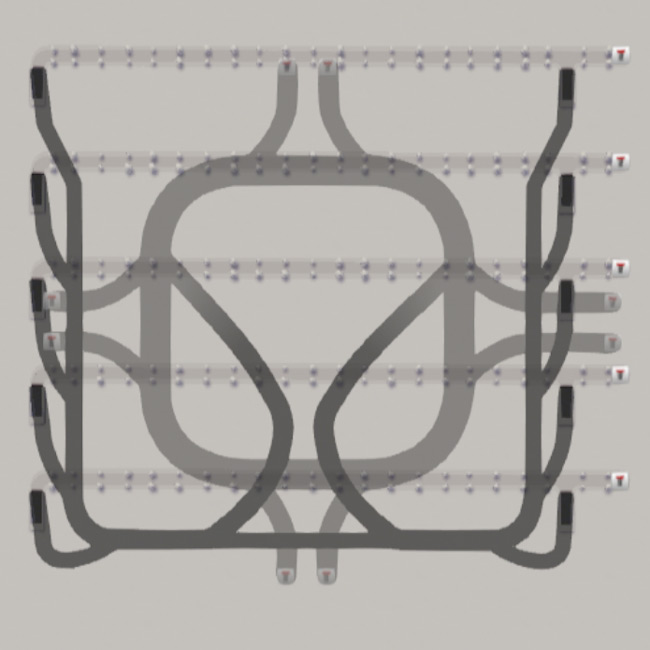 Third generation patterns used three part grid-patterns and were the most efficient design across all criteria. The big change in this pattern was using two-way alleys instead of streets with smaller, more complex underground interchanges. This is where the project finished.

One problem I ran into was that specialty roads (like some kinds of alleys and ultra-compact 4 lane roads) can cause problems with civic services. They flummox the initial pathfinding when you plop a firehouse or garbage dump so that they never dispatch trucks. Make sure there's always a plain vanilla road path around your city so that these buildings dispatch workers. 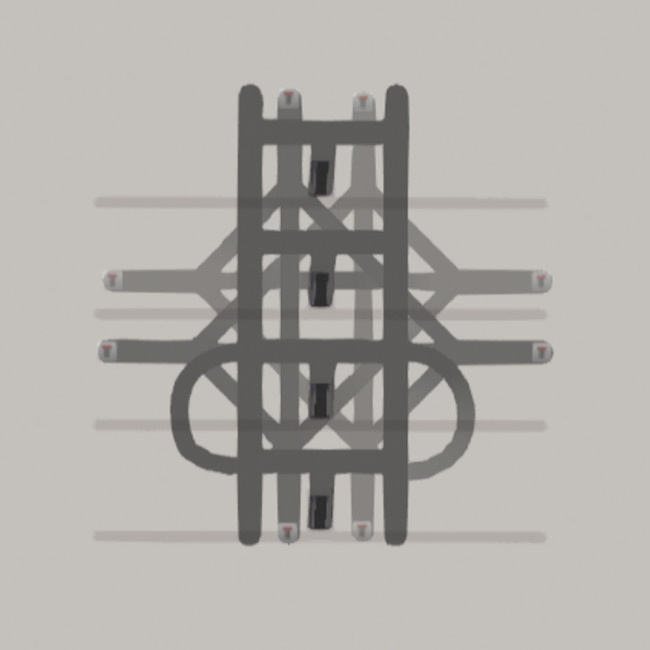 The use of two-way alleys was one of the finer efficiency gains. These kinds of roads use half the squares of a regular street and can hold the same amount of cars (at a lower driving speed). Since underground ramps are always within 30 squares, traffic that needs to go long distances almost always goes underground, reducing surface traffic.

Underground roads are in two parts. The first is a local lattice of regular streets for cost efficiencyand local connection. They're connected north/south to allow pedestrians and cars to move about their general vicinity without a car and connect to the final grid of freeways beneath.

The bottom grid is single/double lane freeways that move in all directions. This moves bulk traffic from one area of the city to another.

One of the biggest problems I ran into was maximizing "overworld" land space- the number of squares available above ground. Subjectively, the biggest loss of these squares are listed below in order from greatest to least.

First we have the roads themselves. The ratio of street to storefront could only be 1:8 at best by using alleys (it's 2:8 with streets).

Next we have civic buildings. Every firehouse, police station, hospital, and mortuary takes up valuable space and often create dead-zones behind them when they're less than 4 squares deep. Some are massive like nuclear power plants that require special areas that break the pattern in order to work.

After that are ramps. Ramps take up double-wide squares plus additional squares behind and in front of them. It's a huge loss relative to the overall surface space but one that's ultimately unavoidable.

Finally there are corners. There were two corners I couldn't really manage for. Corners with alleys that break the pattern and cause a few squares of loss and corners at the edges of the map where mapping roads didn't gain any meaningful additional tiles. In fact, alleys that terminate abruptly would prevent civic vehicles from reaching those buildings, causing an early attempt to lose a lot of population to garbage/crime/fire/etc.

I used a few mods in the creation of this, but I tried to keep it in check so we could get a reliable score.

Caveats and Problems To Solve

There were a few serious caveats that took me a while to accommodate for.

Ramps take tiles. It took a long time to figure out the optimal set of ramps. Ramps are necessarily double-wide so at a bare minimum they eat 8 squares a piece, so you want them frequently enough to keep above-ground streets clear but not so frequent that they diminish buildable area.

Pedestrians are insane. These road layouts are fantastic for pushing citizens to walk where they're going if it's in range, but they seem to cross roads for the thrill of being run down by cars. Traffic lights lower efficiency, so there's not a single one in my town, but now there's a constant stream of people crossing the road EVERYWHERE. This clogged traffic in several places and was resolved using TMPE or mass transit.

Water and power eat space. I'd honestly forgotten about generating power and water for a while. I carved out a piece of the map for water and- square for square- the water pump and green waste water pipe were the most efficient. Combined with ordinances to be water/power efficient, I minimized the space taken. 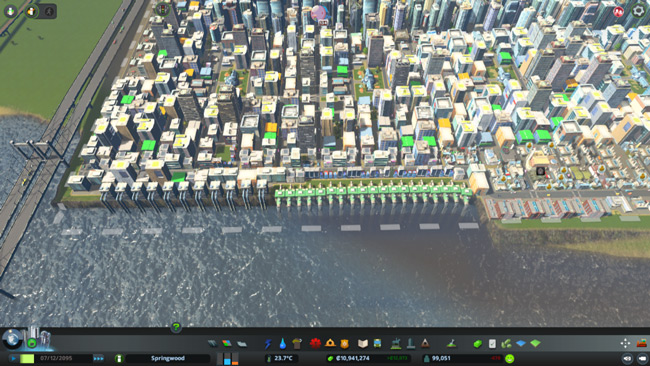 Upgrading is everything. It can feel like a waste using tiles on hospitals and fire houses, but without them the zoned buildings don't upgrade and you lose out on a lot of population. High density and full upgrade are crucial to maximum population. 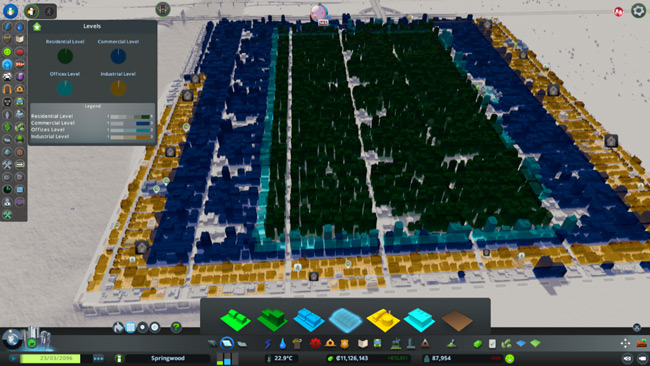 This city upgraded effectively when the whole space was covered by all relevant services (fire, police, and medical).

Residential doesn't grow without commercial/industrial. While the maxium population is defined only by the amount of residential zones that are occupied, those zones won't grow without corresponding commercial and industrial zones. You need a highly educated population but office spaces don't feed commercial zones and commercial zones make residences possible. So your citizens might be rocket scientists, but I hope they like working in a doughnut factory. Because they'll be working in a doughnut factory.

In short, keep that RCI demand balanced with zero demand for residential.

You'll still need subways. Unless you want to spend a fortune on roads, you'll need a mass transit system. Pedestrians clog roads worse than anything, so getting them off the map does wonders for the overall traffic situation. It's costly in tiles and a pain to route subways around the very busy underground areas, but worthwhile in the end. 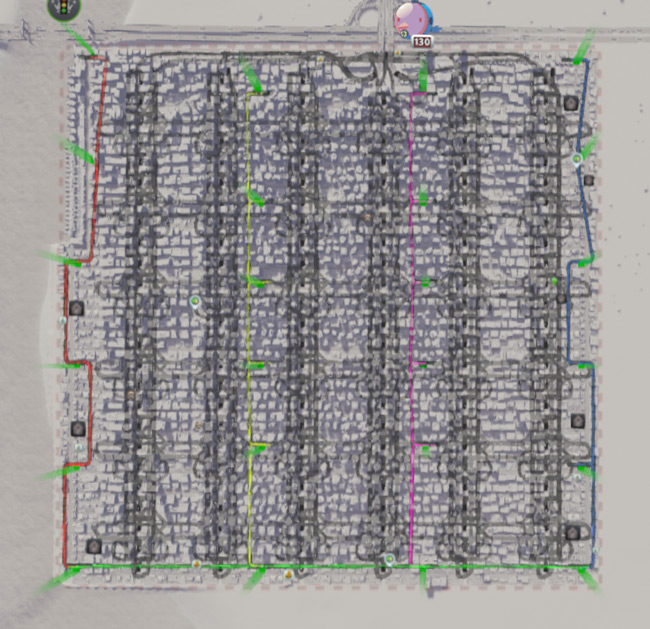 The subways run parallel to north/south transit while the overworld roads run east/west. Those were the most popular lines, with only one line running east/west that were about 1/3rd as useful.

Overall I'm glad with how this experiment turned out. It reached a sizeable population pretty easily once the transit situation was resolved and RCI is balanced to maximize residents. Inbound/outbound traffic only really fluctuated with the life/death cycle of high density residents but overall this method generates cash at 8% taxation rate so you can build out over time.

Thanks for reading, and happy building!